With 7,073 victims in 2020, landmines casualties increase as COVID-19 impedes Humanitarian Mine Action 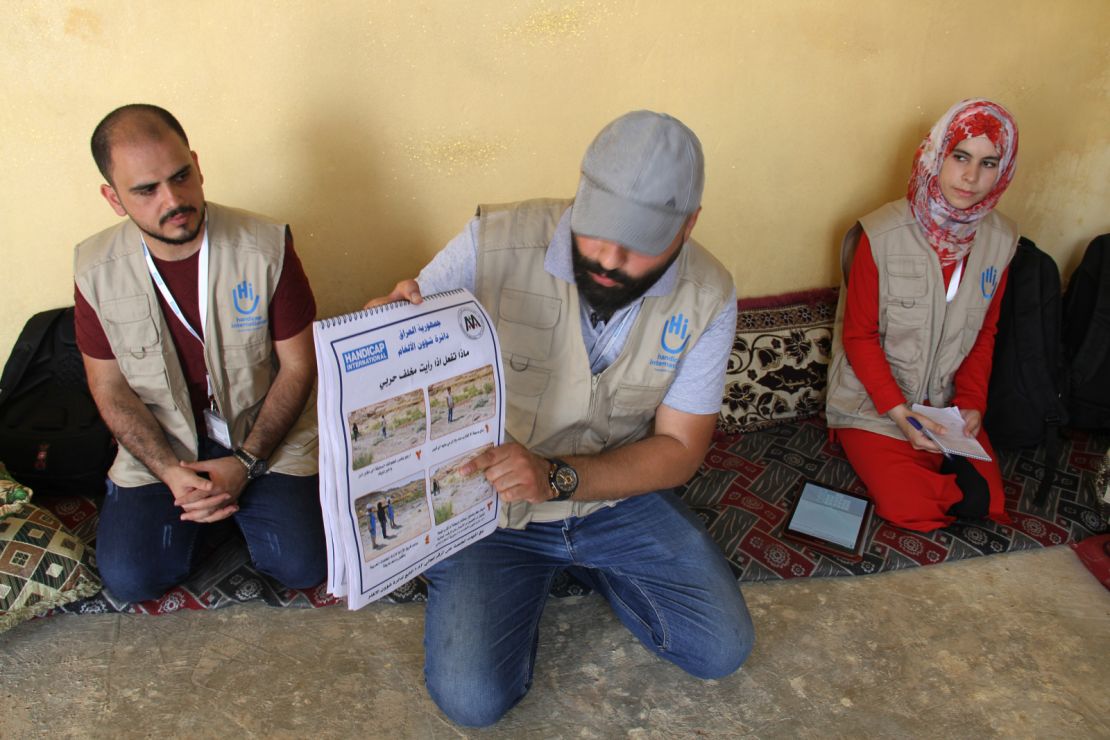 Risk education session in the Kafrouk village around Mosul. Kafrouk is one of the four villages that were on the front line from Dohuk with Felfil, Kanechnik and Karesho. Mohammed Asmat, head of the risk education team, teaches children to recognize the d

Published on 10th November, the Landmine Monitor 2021 reports an exceptionally high number of casualties caused by landmines, explosive remnants of war and improvised mines, for the sixth year in a row. The Monitor recorded 7,073 casualties in 2020. 80% of them were civilians. This high figure is mainly the result of increased armed conflict and contamination with improvised mines since 2015. HI is calling on states – which will gather In The Hague from November 15th to 19th for the annual Mine Ban Treaty conference - to enforce international humanitarian law and to pressure parties to conflict to end the use of these barbaric weapons.

The Landmine Monitor 2021 report measures the impact of the Ottawa Treaty, which bans the use, production, transfer and stockpiling of anti-personnel mines for the 2020 calendar year, with information included through October 2021 when possible.

The vast majority of people killed or injured by landmines are civilians: 80% of casualties were civilians in 2020 (4,437). 1,872 casualties were children. The Monitor also underlines that casualties go unrecorded in many states and areas, meaning the true figure is likely significantly higher.

In 2020, for the fifth successive year, the highest number of annual casualties was caused by improvised mines. Out of a total of 7,073 mine casualties recorded in 2020, improvised mines are responsible for about a third (2,119 or 30%). Explosive remnants of war caused 1,760 casualties.

“The numbers of casualties has been again increasing in recent years. The casualties are still driven by few countries with intensive armed conflicts, involving the large-scale use of improvised mines, like Afghanistan, Syria, Mali, etc. Mines kill or cause complex injuries, often with serious disabling sequelae, and serious psychological trauma. The disability caused by mines is accompanied by social stigmatisation and the new challenge of finding work... The use of these weapons is banned, and that international law must be respected,” says Anne Héry, Humanity & Inclusion’s Advocacy Director.

New reported use of mines

The Landmine Monitor confirmed new uses of landmines by government forces in Myanmar between mid-2020 through October 2021. During that same time, non-state armed groups were found to have used landmines in at least six countries: Afghanistan, Colombia, India, Myanmar, Nigeria, and Pakistan.

The Monitor also reports there were as yet unconfirmed allegations of new mine use by non-state armed groups in Cameroon, Egypt, Niger, the Philippines, Thailand, Tunisia, and Venezuela.

Impact of COVID-19 on mine action

Measures against COVID-19 had a serious impact on mine action in 2020. Restrictions prevented survivors and other persons with disability from accessing services they needed (rehabilitation, social services, etc.) in several mine-affected countries. Clearance was temporally suspended, as well as risk education sessions that had to be adapted to constraints and restrictions against the pandemic.

Progress of the Treaty

To date, 94 States Parties have destroyed more than 55 million stockpiled landmines, including more than 106,500 destroyed in 2020 -Mines that will never claim any victims. Sri Lanka is the latest state to have completed destruction of its stockpile in 2021.

You can access a copy of the Landmine Monitor 2021.