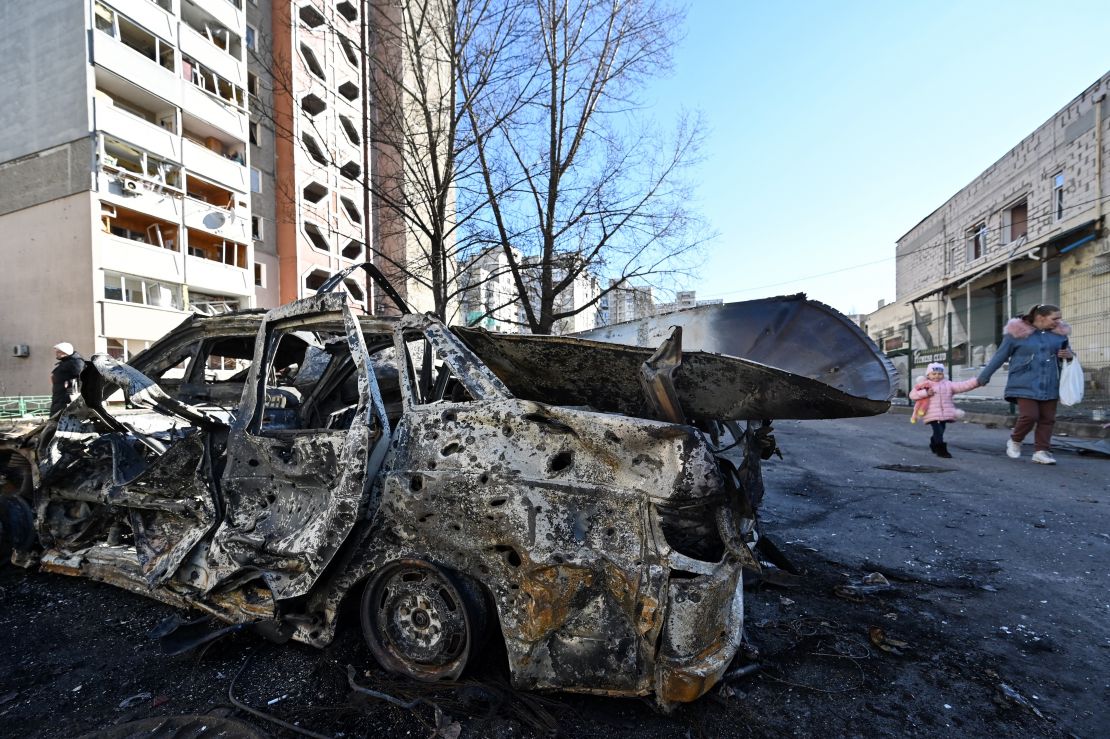 A view of a car which was destroyed by recent shelling in Kyiv outskirts on February 28, 2022. | © Genya SAVILOV / AFP

Humanity & Inclusion – Handicap International (HI) is deeply concerned about the continuous escalation of armed violence that indiscriminately affects Ukrainian civilians since February 24th 2022, after 8 years of conflict in the Donbass.

We are extremely worried about the extensive harm caused to civilians by the use of heavy explosive weapons in populated areas, as well as internationally banned weapons such as cluster munitions.

As documented in recent conflicts, the use of explosive weapons with wide-area effects in towns and cities results in a foreseeable pattern of harm. Research has shown a constant proportion of civilians among victims: when explosive weapons are used in populated areas 90% of those affected are civilians. Because of the huge blast effects of these weapons, their inaccuracy or dispersion of multiple elements, their impact covers large areas. The devastation they cause is aggravated by urban environment, closed space, collapsing walls and buildings.

Explosive weapons kill and/or cause complex injuries. They are the cause of massive forced displacement. Entire communities suffer extensive psychological trauma, with particularly acute consequences on children.

Bombing and shelling in cities also generates reverberating effects: damaging and destroying civilian infrastructures, such as houses, hospitals, schools, water, electricity and sanitation facilities or communication networks. Access to essential services is disrupted.  Explosive remnants of war contaminate the land and impact communities long after the war has ended.

This nightmarish scenario is unfolding in Ukraine where cities like Kiev, Kharkiv, Marioupol, Kherson, Tchernihiv and others are impacted by explosive weapons. One week after the beginning of the conflict, hundreds of civilians have been killed or injured, and the death toll is expected to continue rising, Most of the harm is caused by the use of explosive weapons with wide area impact, including airstrikes and shelling from heavy artillery and multiple launch rocket systems. Bombing occurring on the site of the Zaporijia nuclear plant is adding an even more terrifying perspective to the consequences of the impacts observed on residential building and public infrastructures.

Reports also show that cluster munitions have also been used in Russian attacks, impacting civilian buildings (a hospital, a pre-school) and generating civilian casualties.  Those weapons are internationally banned under the Convention on Cluster Munitions since 2010. Indiscriminate by design, they predominantly kill and injure civilians.

A high level of additional contamination by explosive remnants of wars will be generated by the ongoing offensive, in a country already heavily contaminated by landmines, especially in East Ukraine where the former front was located in 2014.

The humanitarian consequences of what is unfolding are likely to be devastating. According to OCHA’s appeal, 18 million people are projected to become affected by the crisis, and 12 million people are expected to need humanitarian assistance. Reports of civilians trapped in towns and cities under shelling continue. Severe essential health supplies, fuel and cash shortages are reported in the country, with heightened insecurity affecting access to basic services. The escalation of armed violence is forcing people to flee. One week after the beginning of the large-scale military conflict, one million refugees have fled Ukraine to neighboring countries. The number of internally displaced is expected to reach 6,7 million people in the period to come. The numbers are raising by the hour. HI is particularly concerned by the situation of people with disabilities, older people and vulnerable persons, who are facing great obstacles to meeting basic needs like seeking shelter and accessing food. They are trapped and left behind. They need accessible information, access to safe evacuation pathways, shelters, lifesaving medical supplies.

HI strongly condemns the use of illegal weapons such as cluster munitions. We call for an immediate ceasefire and for respect of International Humanitarian Law, including unimpeded access to humanitarian assistance. Stopping the use of explosive weapons is mandatory to protect civilian lives.

The international community must do everything in their power to prevent this from happening again. The situation in Ukraine demonstrates the urgency to adopt the political declaration against the use of explosive weapons in populated areas. HI calls on states to join this historical process and participate to the ongoing negotiations to strengthen the protection of civilians.