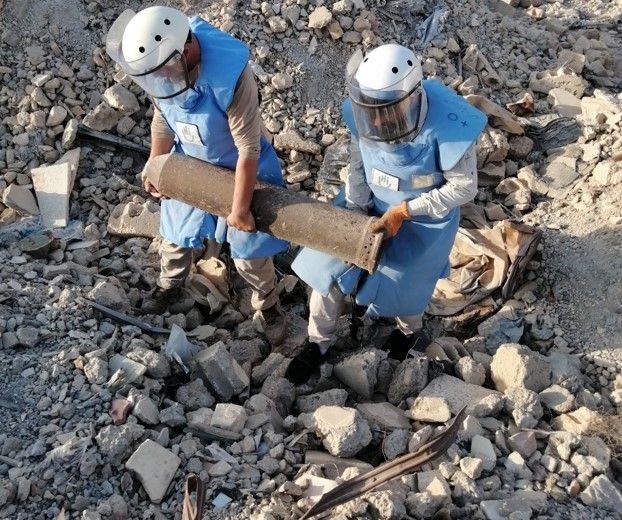 HI teams withdrawing a bomb from the rubble in Raqqa. | HI

HI conducts clearance and depollution operations in Raqqa, North Syria, and its surroundings since 2018. 25 HI demining experts are on task on a daily basis.

War contamination in Raqqa is beyond anything witnessed anywhere in the aftermath of the Second World War. Activities of people in Raqqa on a daily basis are under the threat of explosive remnants. This article is based on the testimonies of Craig Crosby and Melvin Smith who are managing the HI demining operations in Raqqa.

Raqqa was a stronghold of the Islamic State Movement until 2017 when the city was freed by Western forces under Operation Inherent Resolve. People fled the intense 5-month fighting and quickly started to return to the city after. The scale of the devastation still hit us. it’s as if the city was hit by five earthquakes in a row.

5 years later, the contamination left by ground fighting, massive US-led coalition air strikes and booby traps is still there. Many unexploded devices, both manufactured and homemade, remain in the rubble of collapsed and damaged buildings. In the meantime, people have returned because they want to work their land, clear the roads, and reopen the markets, hospitals and schools. The contamination continue to endanger Syrians and compromise the humanitarian response.

The most contaminated city in the world

Raqqa is one of the most polluted city we have ever seen. The contamination is very diverse and complex, affecting all human activities on a daily basis: Buildings like clinic, banks, civil services offices, etc., have been booby-trapped in order to terrorise people and to prevent any return to normal. Unexploded rockets or bombs are in buildings’ rubble after intense aerial bombings. Around the city, agriculture fields were turn into defensive minefields by Islamic State Movement to impeach the progress of any armed groups… The level of contamination is incredible. It is everywhere; every buildings, any square meter of land where you need to be careful.

Our teams are highly skilled and able to face all these different situations. Local authorities task us to intervene in many areas. But we are also called directly by people, through a hotline, to pick up explosive remnants they found on their property, like in their back yard… We receive so many calls every day that we have to prioritise which ordnance we will secure first.

It is a race against time to clear lands with a view to restoring the city and its surrounding fields to its inhabitants. The removal of the rubble, which is the pre-requisite for carrying out any reconstruction work, can not be done without clearance operations first. The contamination impeaches the rebuilding of the city.

The contamination is so complicated that it will take decades to clean Raqqa. Raqqa is for us like a laboratory where you can find all the range of contamination in urban and rural areas coming from a modern conflict, marked by intense use of explosive weapons.

We want to contribute to rebuild the city and we regret that after a pick of funding in 2017 and 2018, clearance operations are a bit forgotten by institutional donors today. That is really a concern for us.

Types of weapons to clear

Islamic State Movement fighters deployed improvised explosive devices throughout the city to ensure maximum terror and destruction: you can find stories of mines wired to light switches, stashed in mattresses, and hidden in hollowed-out Qurans, which hamper the resumption of ordinary and everyday activity.

We find all range of explosive munitions primarily dropped from above by International Coalition Forces as part of Operation Inherent Resolve. We also have to deal with traditional manufactured landmines.

With over 2,500 recorded between 2013 and 2019 total explosive weapons use incidents and an anticipated airstrike and artillery failure rate of between 10-30 percent, it is assumed that some 250-750 unexploded weapons must therefore be found in the city. [1]

Key Infrastructures like dam or waterways are also contaminated with explosive remnants and release chemical and toxic contamination. Tap water is no longer fit for consumption in some areas and we have been reported cases of cholera recently…

The people are really counting on us to release them from this threat. Progress are slow, and many civilians unwilling to wait for assistance took it upon themselves to remove explosive remnants from their homes at great personal risk.

We have just opened clearance operations in Der-er-Zor, another major city, 2 hour-drive from Raqqa. Next year we also want to launch a female depollution team.