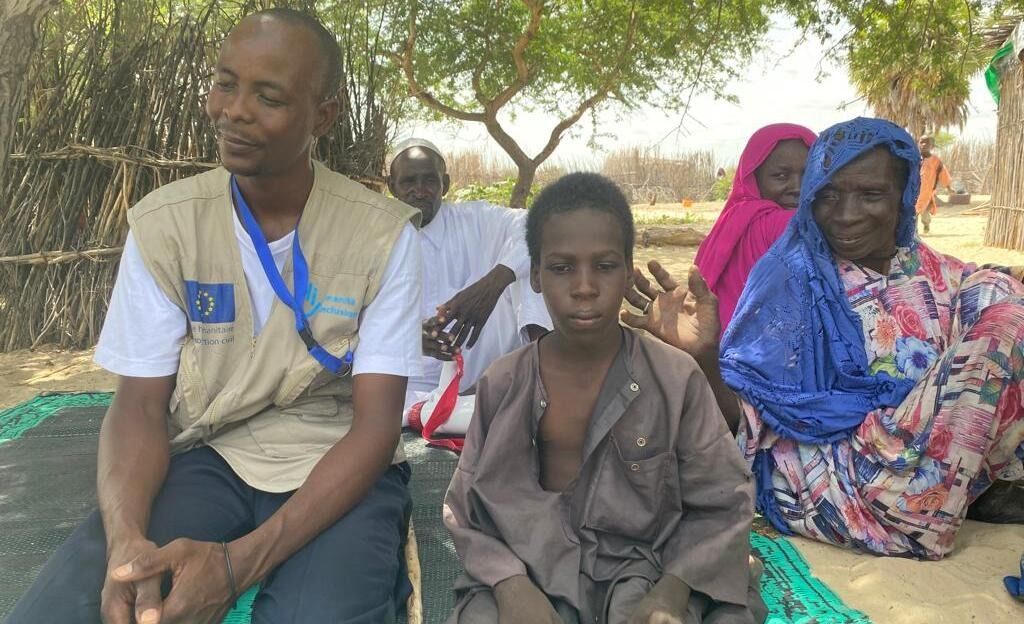 At the Kousseri displacement site on Lake Chad, 13-year-old Mahamat decides that his disability will not stop him from getting an education.

Mahamat1  , a 13-year-old boy, lives in the Kousseri site in Baga Sola, Lake Chad Province. The Kousseri site is home to more than 7,000 internally displaced persons (IDPs), victims of violence by non-state armed groups, and those impacted by the effects of climate change and environmental degradation in Chad's Lake Province. Currently, 505,120  people are affected by the crisis, including internally displaced persons (IDPs), refugees, and former IDPs returning from abroad.

Left in the care of his grandmother three years ago, Mahamat no longer lives with his parents, who reside in another village farther away. When he was two years old, Mahamat developed an illness that still affects him today: he lives with a physical disability in both lower limbs and uses a crutch to get around.

The path to school 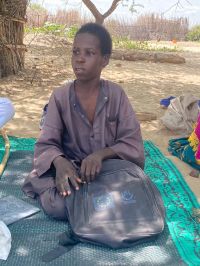 In school since last year thanks to the PROSCOLAC project "Protection and schooling of children in the Lake region", implemented by HI and financed by the European Union (ECHO), Mahamat recounts how he got there.

That day, Mahamat returned home with the school kit provided by HI, including a school bag, slate and chalk (which he proudly shows off), and informed his grandmother that he was now enrolled in school.
"I went back to the other children and showed them the school kit I had received. They told me that we would go back to school the next day, and the day after that too. I was very happy!"

Mahamat likes to learn every day

In preparation for the start of the school year, members of the awareness committee2 go door-to-door to raise awareness among families and encourage them to enroll their children in school. Mahamat's grandmother had also been reached by a member of this committee, and was therefore in favor of her grandson's enrollment.
Having never been to school, Mahamat joined the CP1 class, while waiting for the implementation of the Non-Formal Basic Education (NFE) classes in which he will be integrated. Every day, with the help of his crutch, he walks to school. The journey is long and tiring.
Mahamat also benefits from food support and medical care thanks to his identification by the mobile team. HI has provided him with crutches that allow him to walk to school more easily, and to have more energy to concentrate on his learning, as Mahamat likes to learn new things every day.
"In the classroom, the teacher puts me in the front row so that I can follow the lesson well. He often asks me questions, so I feel at ease.”

Through the same project, Mahamat's teacher has been trained in inclusive education. Before the beginning of the school year, teachers undergo a three-week training, provided by education officers, psychosocial support protection officers, the HI project manager and primary education pedagogical inspectors (IPEPs).
This training covers basic didactic teaching but also other topics such as stress management, psychological first aid, hygiene and sanitation, and especially the inclusion of children with disabilities. Accessibility and inclusion are addressed in a transversal way in all the modules, allowing teachers to take better care of children with disabilities, while giving them tools to raise awareness among other children and allow a protective and inclusive educational environment for all.
As of October 2022, 90 teachers have completed this training, bringing the total number of trained teachers since the beginning of the project to 126 in 12 schools in the departments of Fouli and Kaya. All these teachers have seen their capacities reinforced on the Individual Educational Plan (IEP), the school project, conflict transformation and innovative pedagogical approaches.

Mahamat has re-enrolled for the beginning of the school year in CP2. But, given his age, the HI teams will work so that he integrates a more adapted class, such as a program of non-formal basic education if it interests him.
Mahamat hopes to finish his schooling because he knows that he will need it to fulfill his dreams. He already has a clear idea of what he wants to do in the future.
"I would like to pass on my knowledge and teach at the Koranic school, and at the same time raise goats and become a rich merchant to support my family! And for that, I know I need to go to school."
In the 2022-2023 school year, 7,546 children (113 with disabilities), including 3,769 girls and 3,777 boys, were identified and enrolled in school thanks to the PROSCOLAC project.
This project is part of HI's ongoing initiative to improve access to school and the quality of schooling, which will support 12,000 children in the departments of Fouli and Kaya affected by the humanitarian crisis.

Humanity & Inclusion (HI) has been present in Chad since the 1990s in the sectors of inclusive and emergency education, mine action, victim assistance, peacebuilding, physical and functional rehabilitation and the socio-economic inclusion of vulnerable people and people with disabilities. It currently implements projects in N'Djamena as well as in the provinces of Lac, Logone Oriental, Kanem, Barh el Gazal and in the regions of Borkou, Ennedi and Tibesti (BET).

FUNDED BY THE EUROPEAN UNION

The European Union and its Member States are the largest donor of humanitarian aid. Through the Directorate General for Civil Protection and Humanitarian Aid Operations (ECHO), the European Union helps millions of victims of conflicts and disasters every year. With its headquarters in Brussels and an international network of field offices, it provides assistance to the most vulnerable people on the basis of humanitarian needs.

1 The first name has been changed

2 Influential members in the community, trained and mobilized by HI teams to relay these messages