Life is returning to normal in Chad 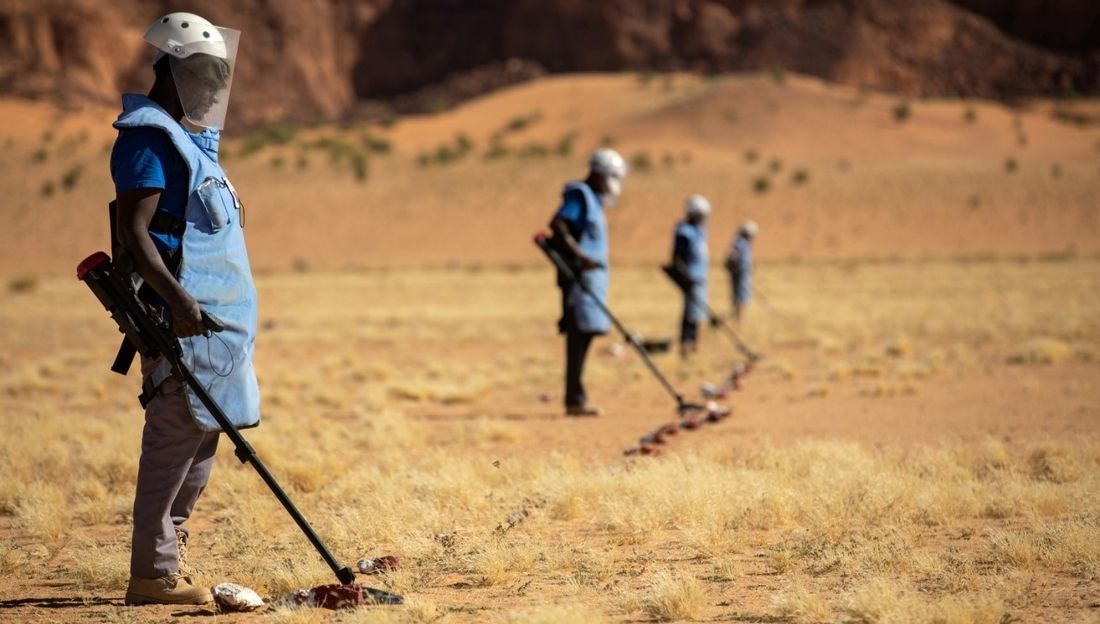 Rachel Datché tries her new prosthesis supplied by the PRODECO project at the orthopaedic and rehabilitation centre in Kabalaye, a district of N’Djamena. | © G.Dubourthoumieu / HI

From weapons clearance to helping individuals set up their own business, HI has stepped up its actions in aid of the population of northern Chad with the aim of promoting development in the region.

For the last four years, HI has implemented a vast development programme in consortium with three other NGOs to help restore the economic self-reliance of the local population.

Rachel Datché, 33, was travelling to see her sister when she stepped on an anti-personnel mine in Fada, northern Chad. After her right leg was amputated, she was given a prosthesis and care-managed by the orthopaedic and rehabilitation centre in Kabalaye, a district of N’Djamena, in 2020.

Ache Guene, 38, lost her husband four years ago and was suddenly faced with the difficult task of raising their five children alone. With help from HI, she set up her own business and lifted her family out of poverty.

Rachel and Ache are both beneficiaries of PRODECO - a large-scale development project implemented by HI in association with other NGOs in the Borku and Ennedi regions of northern Chad. Their aim is to help the population of these rural and agricultural areas earn a living by ensuring the roads leading to their villages are clear of mines.

Oreike Bandy is one of the beneficiaries of the PRODECO project. Since her divorce four years ago, this 38-year-old mother had struggled to feed her family by selling bread at Fada market before HI helped her to set up her own small business. “I joined the village savings and loan organisation [AVEC] and put aside some of my earnings each week to invest in the AVEC. This enables me to renew my stock of food products.”

The regions of Borku and Ennedi were ravaged by civil war and the conflict with neighbouring Libya in the 1980s, leaving them contaminated by anti-personnel and anti-tank mines.

Weapons clearance operations in the prefectures of Faya and Kirdimi have decontaminated three million square metres of land, the equivalent of 400 football pitches. Half of this area was cleared by 120 people coordinated by HI and its partner Mine Advisory Group (MAG), who destroyed more than one thousand mines.

They also had the opportunity to test the drone mine detection system, which is set to revolutionise mine clearance operations.

Alongside its mine action, HI’s teams work in sixteen rural communities where they are helping build facilities such as fodder shelters and veterinary pharmacies. They also assist the poorest individuals by providing them with a social fund to set up their own businesses.

Maimouna Abass, a 30-year-old widow and mother of two children, now runs her own market stall in Fada: "My life has changed. I can reinvest my profits in my business,” says the young woman, who sells biscuits to earn her living. More than one thousand people have already benefited from assistance to become financially self-reliant.

100 sq.km of land contaminated by mines in Chad

In 2017, HI launched a large-scale development programme called  PRODECO in conjunction with three other NGOs: Mine Advisory Group (MAG), the Swiss Foundation for Demining (FSD), and Secours catholique et développement (SECADEV). As part of this project, HI recently completed its mine clearance operations in northern Chad. The organisation will continue identifying people with disabilities, mostly former victims of mines or explosive remnants of war, in villages and communities until the end of 2021.

Half the population of Chad lives under the poverty threshold and thousands of people are threatened by mines or explosive remnants of war.