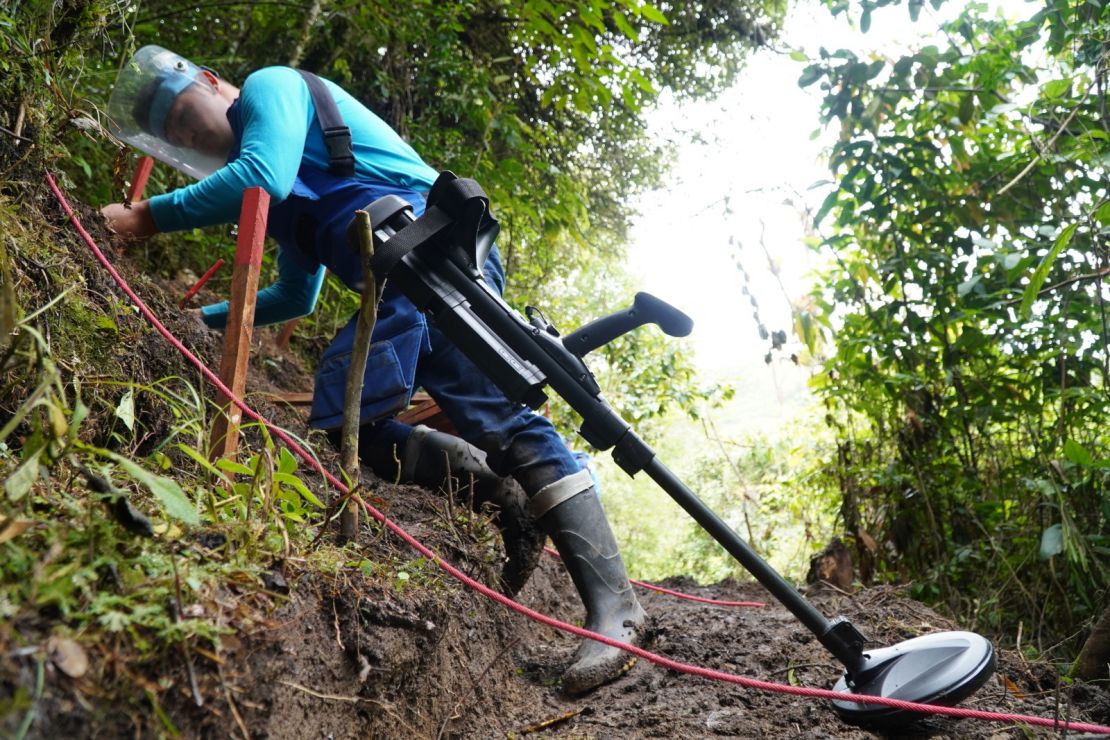 A deminer working in the Chaparral area, where teams have to cope with regular flooding, rockslides and landslides. | © J. M. Vargas / HI

Since October 2021, HI has been conducting humanitarian demining operations in El Cañón de Las Hermosas in Colombia, allowing communities to regain the use of their land.

Four areas in El Cañón de Las Hermosas are potentially contaminated by explosive devices: El Escobal, La Aurora, El Davis and Las Hermosas Natural Park, a protected nature reserve. Thanks to the surveys and clearance operations carried out by HI’s teams, the communities will soon be able to use their agricultural and pastoral lands again and gradually restore the ecosystem.

The terrain around El Cañón de Las Hermosas is rugged and mountainous. Landslides, floods and landslides frequently block the only access road, cutting off the communities.

"To reach the work sites, the demining team has to travel on horseback for about five hours, crossing rivers and ravines," says Toni Vitola, head of the demining project in Chaparral.

Toni explains that HI's goal is to clear 42,800 square metres of land. The team of 10 or so deminers works for six weeks on site before having two weeks off.

With the first surveys of the area completed, demining operations were launched in July of this year. During the first year of the project, 60 people also benefited from mine risk education.

"There is evidence of explosive devices in the first area we are going to clear. Detonations have been heard there and five cows disappeared after entering the area," adds Toni.

The areas where HI is working are between 1,600 and 4,000 metres above sea level. They are traditionally used by the communities to grow coffee, maize, bananas, yucca, and as pasture. The possible presence of explosive devices, a legacy of the armed conflict, is currently preventing the inhabitants from making full use of their land. Thanks to HI's demining operations, they will soon be able to reclaim it in safety.

To support community-led development projects, HI also organises consultations with the inhabitants to determine their priority needs. These consultations have led to the development of project to construct three large greenhouses. This project will be supported by HI.

Álvaro Lozano is a community liaison officer who works for HI. He comes from the Chaparral area himself and has inspiring hopes for his community - hopes that are shared by all the inhabitants of Chaparral:

El Cañón de Las Hermosas is an area marked by a long history of armed conflict. For more than 50 years, the communities here have suffered the humanitarian consequences of this conflict: forced displacement, confinement, forced recruitment, accidents caused by explosive devices, to name but a few.

"I was confined to my house for two years because an armed group ordered it. I couldn't bear the idea of being locked up on my own land," says Álvaro.

Since the peace agreements, the region’s natural wealth is being rediscovered. It is home to almost 50,000 hectares of forests, lagoons, wetlands and "paramos"- the high plateaus of the Andes. Species of flora and fauna thrive here that are found nowhere else, including endangered species. As Álvaro points out, the presence explosive devices also affects wildlife.

HI's demining operations in Chaparral are carried out with the support of the PM/WRA.