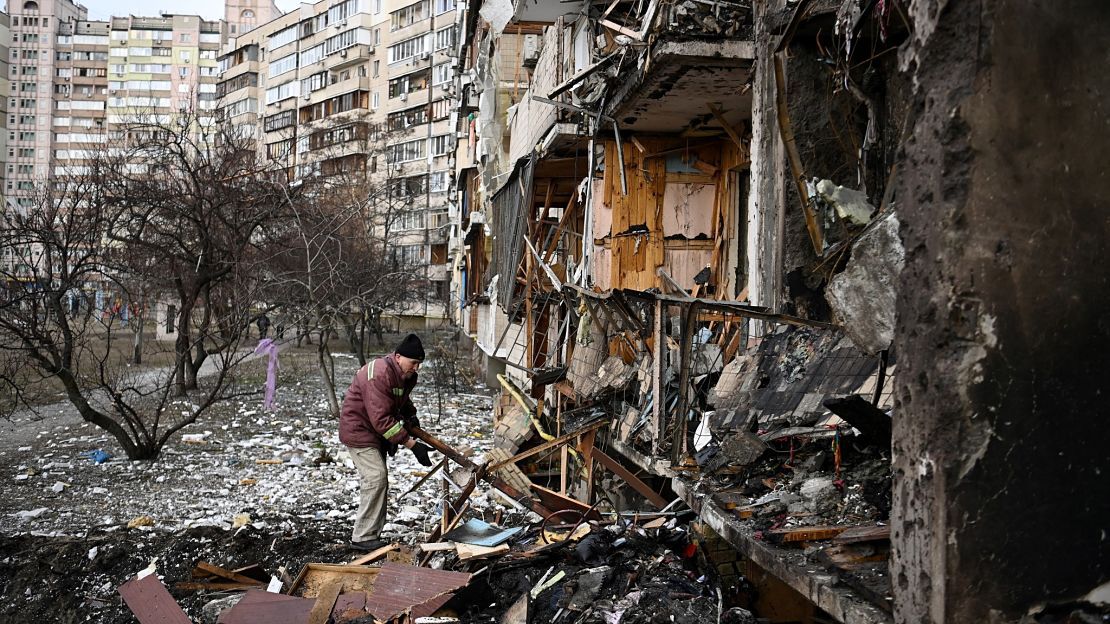 A man clears debris at a damaged residential building at Koshytsa Street, a suburb of the Ukrainian capital Kyiv, where a military shell hit, on February 25, 2022. | © AFP

Since February 24, 2022 marked the beginning of a large-scale military conflict in Ukraine, cities across the country have been the target of devastating weapons strikes.

Bombing and shelling in Ukraine force thousands to flee the country

Bombing and shelling have continued throughout the Ukraine for seven days, destroying many civilian infrastructures, like roads, houses, apartments, public service buildings, etc.. While exact numbers are still uncertain, scores of people have been injured, many have been killed. It is well documented that when used in populated areas, 90% of the victims of explosive weapons are civilians. Reports also mention the recent use of cluster munitions, a weapon that is banned by Oslo Treaty.

At least 12 million people are in need of immediate humanitarian aid. As bombing and shelling intensify, it will drive these numbers even higher at an alarming rate.

Bombing and shelling in populated areas cause mass displacement of the population, forcing over 700,000 people, mostly women and children, to flee their homes in search of safety. Around 450,000 people have fled to Poland alone, while tens of thousands are relocating to Romania, Moldova and Slovakia. Families are waiting as long as 60 hours to cross borders in hopes of leaving Ukraine and must endure freezing temperatures.

For those unable or afraid to travel in such a volatile situation, families are living underground in crowded bomb shelters without access to basic needs such as food or hygienic supplies.

A large part of the Ukrainian population is already vulnerable: Around 30% of the population is over the age of 60, with high rates of chronic illnesses, and 13% of people live with disabilities. These individuals no longer have access to essential medications or services to support their physical health, and often face greater difficulty relocating.

Markets throughout the capital city Kiev have quickly run out of supplies, and cash is no longer circulating- making it impossible to purchase any goods.

HI has deployed two teams to conduct an exploratory mission in the Ukraine and its surrounding countries. The objective of the mission is to assess the context and current needs to determine if and how HI can support the people of Ukraine.

The evaluation will determine specific needs of vulnerable populations, including injured individuals, people with disabilities, and people with illnesses. Potential responses could include support for post-operative care, distribution of paramedical equipment, and psychosocial support. Assessments will also cover needs for shelter, daily items, sanitation and hygiene, rehabilitation, armed violence reduction, logistics support and inclusion of the most vulnerable populations in accessing aid.