Carers doing rehabilitation exercises with children with multiple disabilities in a refuge in western Ukraine. | © HI

The people of western Ukraine are facing growing needs. HI is assisting a refuge for children with multiple disabilities by strengthening its care services.

Providing refuge and assistance to children with multiple disabilities 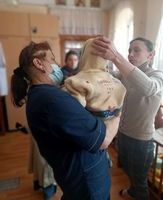 “We’re facing dire circumstances,” says Çaglar Tahiroglu, a mental health and psychosocial support expert who is coordinating HI’s health project in Ukraine. “Especially in this refuge for children with multiple disabilities, which used to care for 10 children before the conflict and now provides shelter to 52. It has taken in 42 children evacuated from the region of Luhansk, who travelled for two whole days to reach western Ukraine. It has not been given additional resources, nor did its teams have time to prepare for their arrival. When we met them, they were in a very difficult place.”

“We provide shelter to children with severe intellectual disabilities,” explains Olga, the refuge’s medical director. “Some have behavioural problems or autism spectrum disorder, for example, and many have epilepsy syndromes. Some of these children are orphans, or they were entrusted to us by their parents because they have multiple disabilities and special needs.”

The refuge manages to cover the children’s basic needs - for food, clothing and medical care – with the support of volunteers and non-profit organisations. The most serious challenge today is to meet their other needs by stimulating their personal development and providing them with mental health and specialised psychosocial support and appropriate leisure activities.

“The situation has been extremely testing for the whole team. We’re working to help the children and the care teams, who are having to cope with an extremely heavy workload,” says Çaglar. “We take a global approach to the children’s psychosocial wellbeing. We increased the refuge’s human resources and worked with a cleaning company, so the teams spend less time on chores and more quality time with the children. We formed a partnership with physiotherapy specialists and improved the team’s care practices. We also assessed the children’s specific needs and then referred them to other organisations. Lastly, we sent a mobile psychosocial support team to assist the children and the team at the refuge, many of whom are shaken by what’s going on.”

The children who live at the centre have been badly affected by the conflict. “Although they have intellectual disabilities, their intuitive empathy is highly developed,” says Olga. “When they arrived, the children were stressed and sometimes irritable. Many are feeling more emotionally stable now, but some are still struggling to adapt. We lack information about their health and care history, because some medical files were lost in the evacuation, which makes things more difficult.”

“HI is providing emergency aid and has implemented it very quickly to address essential needs,” says Çaglar. “Once we have stabilised our actions in the refuge, we hope to extend our response. We want to provide training, for instance, and continue improving care practices.”

HI works with several community centres for displaced people in western Ukraine. The region already plays host to some two million people displaced by the fighting and who have tremendous needs.