HI trains and supports mine clearance specialists in Cambodia 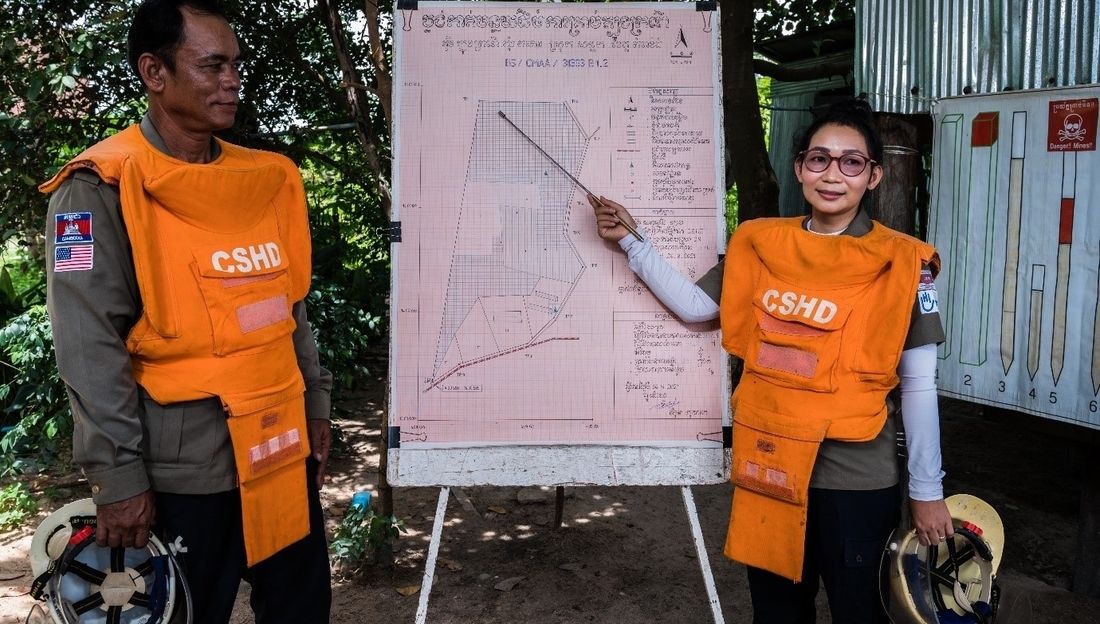 The CSHD team during a briefing to prepare before its next intervention in the field. | © Rafael Winer / HI

HI trains mine clearance specialists from the Cambodia Self-Help Demining (CSHD) association, which has already cleared 7 km2 since 2008, equivalent to 70 football fields

Over one million landmines and almost 3 million explosive ordnances such as cluster munitions, grenades, mortars, etc. have been removed in Cambodia since 1992. But clearance efforts must continue.

Contamination is considered massive in Cambodia with more than 700 km2 contaminated by landmines or cluster munitions, remnants of the Vietnam war and civil war in the 70s and 80s.

Preparing local organisations to take over

HI is currently launching a 5-year plan to train the Cambodian Self-Help Demining (CSHD); a Cambodian mine action organisation that participates in clearance efforts. Cambodia aims to be landmine-free by 2025, and HI is preparing the local organisation to take over residual contamination actions after this date. When a country is declared free of mines, a few mines may remain in some overlooked areas. In those instances, International mine action leaves the country and passes the responsibility to local organisations.

How to train mine clearance experts

How are surveys implemented? How are former battlefields cleared? How can we intervene immediately after an explosive ordnance has been reported by a resident? HI has been training a dozen CSHD mine action specialists in these tasks since January 2021, including procedures of intervention, planning, and security rules. HI is also training the CSHD experts to conduct sustainable and cost-efficient operations and to ensure quality management with technical supervision.

“HI supports the clearance experts in their current mine detection and disposal operations. The proposed training is largely dedicated directly to clearance and survey with a target of  807,500 m2 cleared in target areas this year. We also focus on the cost efficiency of the operations. CSHD estimates that the cost of clearance is about 0.35 USD per square meter (clearance and demining). HI is supporting CSHD in becoming an autonomous key player within 5 years. The local organisation will remain in the country after 2025, when other international organisations will be leaving. This is our main goal of development: to empower local actors to take on this responsibility.”

The extent of the contamination

With an estimated 4 to 6 million explosive ordnances  left over after the war and an extensive cluster munition and landmine contamination, Cambodia is considered to be among the most affected countries.

A threat to the local population

Civilians collect items of ordnance for their value, as scrap metal, or the explosives they contain. If not disposed of safely, the consequences are often fatal or lead to lifelong disabilities. Given the magnitude of contamination and the country’s current response capacity, the threat remains a major safety and development obstacle for Cambodians in 6,416 of all 14,300 villages.

Clearance for the people

Since 2008, the CSHD team has already cleared 6.9 km2 of land (June 2020), equivalent to 70 football fields. The primary purpose of humanitarian mine action is to hand over cleared land to people, so that that they can use it for housing and farming.

Thank you to our donor, the U.S. Department of State Office of Weapons Removal and Abatement (WRA), for supporting this project.

Cambodia Self-Help Demining (CSHD) was officially founded in 2007 by Aki Ra, a Khmer man and former child soldier. CSHD works in rural villages throughout the Kingdom of Cambodia with a group of approximately 25 mine clearance specialists.