Fleeing violence in Syria: Osama has been a refugee in a wheelchair for 8 years 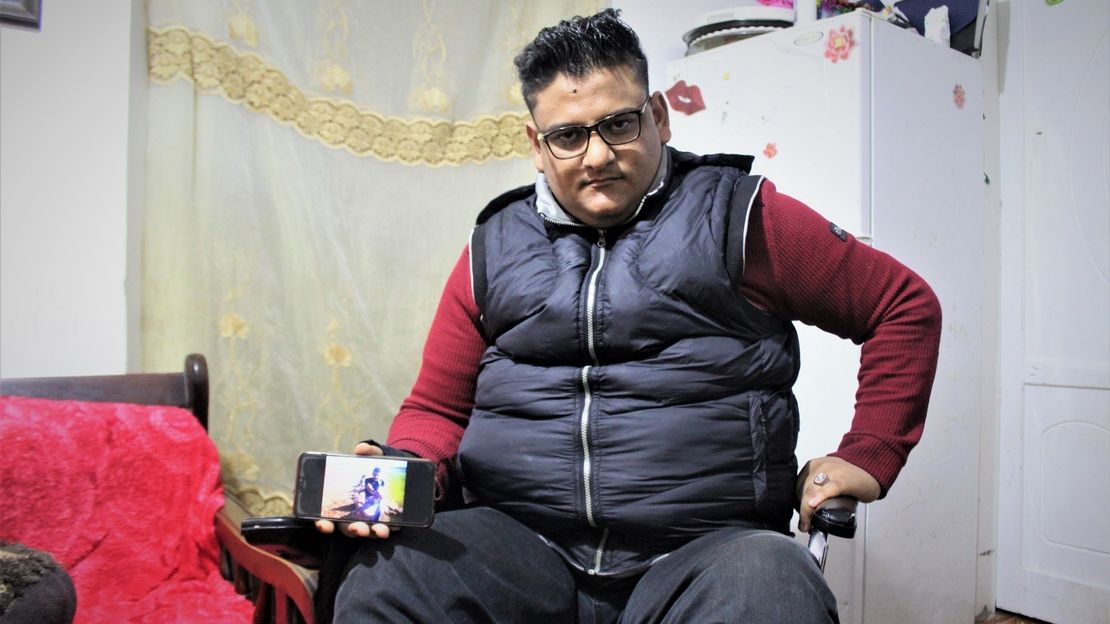 Osama in his wheeling chair | © HI

25- year-old Osama was living in a nice house with his family in the south of Syria until his neighbourhood was bombed in 2012. His 13-year old little brother died and the family had to flee. A missile fragment entered one of his 12th vertebras, leaving him paralyzed from the waist down.

Osama fled Syria in 2012 and now lives with his mother and his little sister. His father passed away in 2017. The family mainly depends on humanitarian assistance. He is paralysed and his legs still ache terribly.

To flee the violence

Osama first arrived in Jordan with his mother as an emergency case to a hospital situated in the north of the country. He stayed in Zaatari camp for the first 10 days.

He remained hospitalized for one month after undergoing surgery. Once his physical condition settled, the family moved into a small, two bedroom apartment for a year in West Irbid.

The mother only had one dress that she was wearing when she arrived to Jordan, and Osama had one small bag of clothes. At first, they received help from the neighbours. They received donations of clothes, a heater and food.

Osama laid on his bed for a whole year, refusing to face his new condition. He then started receiving the correct services and his situation improved. He is now volunteering with HI, helping our team reach other similar cases. He shares his story with other refugees which helps him overcome his trauma.

To be paralysed without wheelchair

At first, Osama would not leave the house as he didn't have a wheelchair and had no intention of getting one. HI visited him for the first time in 2013. He was given a wheelchair, taught how to use it, go up and down ramps, and how to dress himself. He was supported by our team for two years.

He also received psychological support. He started talking about the places he wants to visit and what type of educational courses he would like to take. He finished high school after attending a special program for Syrian refugees in Jordan, but his certificate is not recognized by most of the educational institutions.

To remember the happy time

In Syria, Osama studied car mechanics in an industrial high school. Every morning, he used to take the bus, then meet his friends and head to classes. After school, he hung out with his friends until evening. Either they went to an internet café, public garden, or to a friend’s house.

After arriving home, he would help his family with house chores, mainly gardening. His family’s economic situation was good and he was one of the few people who owned a computer at home. Sometimes he would sit on the computer for two hours and play video games. Their olive garden brought a good income every year by producing oil.

Now no one is approaching that area because of the destruction and devastation the town was left with.

To live in a wheelchair

Daily difficulties start when Osama needs to leave home. Streets and sidewalks are not adapted to people in wheelchair. He cannot get around or access any buildings and generally faces many obstacles due to the city lacks of accessibility. Moreover, he has trouble finding a decent job or continue studying.

He used to be a regular student in car mechanics, but war, his spinal cord injury, and his condition as a Syrian refugee, has changed everything. He faces a hard time receiving a good training, as most affordable education institutes are not accessible to him.

In addition, he cannot apply for a qualified a job as employers are requiring college certificates and specifying that Osama is self-taught in programming and photo editing.

His dream would be to immigrate to Canada where his uncles lives, in order to receive a good education in college, access more services in a convenient community, and to become a game developer.

HI and its local partners assist Syrian refugees and vulnerable people in Jordan and in Lebanon since 2012.

"I go wherever I am needed for emergencies"