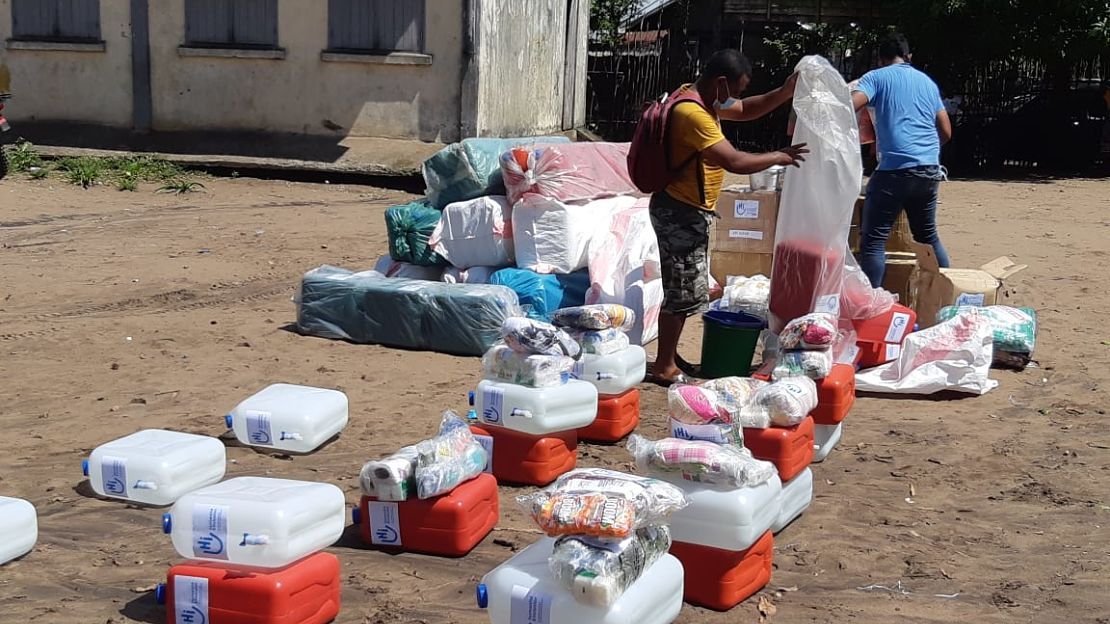 The immediate impact of Cyclone Emnati remains uncertain, but the long-term consequences will be significant. HI supports affected families recovering from back-to-back cyclones.

Cyclone Emnati hit the coast of Madagascar February 22nd, making landfall at 22:00 between the regions of Manakara and Farafangana, where HI teams were already carrying out response activities. It was the fourth major tropical storm to hit the island in the past month, and followed a similar path as cyclone Batsirai, which devastated communities just two weeks earlier.

The storm tore across the island with wind gusts as high as 200 km per hour and intense rainfall, eventually exiting the country the evening of February 23rd. Nearly 40,000 people from over 9,000 households were displaced ahead of the storm across seven regions. Telecommunication networks are down throughout the path of the cyclone, limiting contact with affected areas. Though it is still too early to determine the extent of damage, authorities are particularly concerned for the impact on communities still suffering the consequences of the violent cyclone Batsirai.

“The same people are victims again.” says Anja Andriamorasata, HI Communications and Advocacy manager in Madagascar. “They have lost everything: their livelihoods, their clothes, their homes. Everything must be rebuilt.”

HI is supporting communities and people with disabilities

Among the most affected are people in situations of disability, many of whom have faced great difficulty evacuating their homes twice this month among flooded streets and rough terrain.

“We received a call from a man with reduced mobility,” says Anja. “He lives alone and needed to leave his house to reach a safe shelter. With the rising level of water, flooding and intensity of the wind, he told us that this cyclone was even more intense for him than the last one.”

Prior to the storm, HI was able to finalize emergency supply distributions in Mahanoro and Manakara to support communities and over 200 people with disabilities affected by Batsirai, and support accessible evacuation centers. Once security restrictions are lifted, HI will continue its response to cyclone Batsirai and begin contributing to evaluations and responding to cyclone Emnati in Farafangana, Manakara and Vondrozo.

“It will take time to assess the damage, and even to access the regions affected,” says Vincent Dalonneau, HI director in Madagascar. “We already know that the road to Farafangana is cut off in two places.”

Friday, a logistics specialist is joining HI’s efforts to assess road and infrastructural damage during initial evaluations after the storm.

Already without immediate access to clean water, food, shelter and other essentials, affected communities will be dealing with the long-term impact of these consecutive storms well after houses are rebuilt. Not only have thousands of homes been destroyed over the last few weeks, but vital infrastructures have been severely damaged, including schools and hospitals. Thousands of children will go without education. Entire communities are unable to access medical services at a time where COVID-19 is easily spread in crowded evacuation shelters, waterborne diseases are a greater risk after weeks of flooding, and people have limited access to basic hygiene facilities and supplies.

Farmers have lost their crops and animals, and artisans have lost their materials. Without income, families will struggle even more to rebuild their lives and meet their basic needs. Furthermore, people are experiencing prolonged fatigue and stress, which can lead to needs for mental health services and psychological support.

“It will be very difficult, and it will take time,” says Anja. “We have to start over from nothing, so it will be a great challenge to rebuild everything again.”

In addition to providing essential household items and covid prevention items in its emergency supply distributions, HI is providing cash transfers to vulnerable households to support the economy and enable the purchase of vital goods.