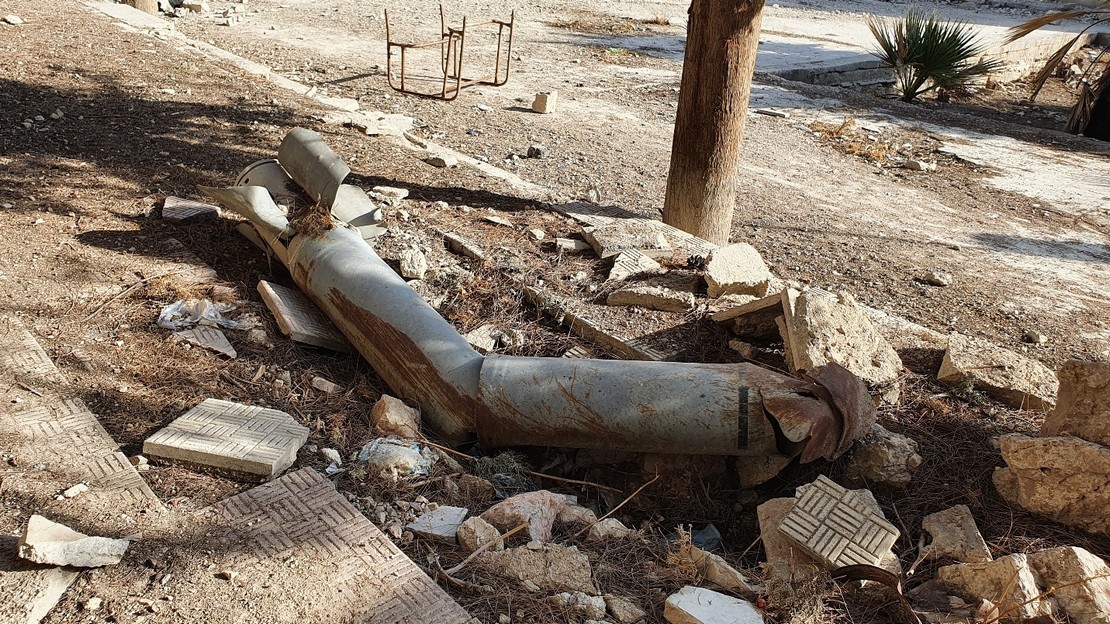 Explosive ordnance in a school in an area in Syria emerging from active conflict. Courtesy of an International Humanitarian Mine Action actor operating in Syria. | ©Droits Réservés / Reserved Rights

HI, in collaboration with the Syria Mine Action Area of Responsibility, publishes on May 11 the “Explosive ordnance in Syria: impact and required action” report on the extreme level of contamination in Syria.

After 11 years of war and intensive use of explosive weapons, up to 300,000 explosive ordnance have failed to detonate in Syria. One in two people in the country are at risk from explosive ordnance. This amounts to over 10 million people – about the size of the population of Portugal or Sweden.

As clearance will be key before any reconstruction can even be considered, HI calls donors to significantly support demining operations, but also risk education awareness campaigns to protect people from further accidents. HI also calls for immediate and concrete assistance to survivors.

The devastating impact of contamination in Syria

The report “Explosive ordnance in Syria: impact and required action” is published on May 11 by HI, in collaboration with the Syria Mine Action Area of Responsibility, a group of over 60 organisations specialized in Humanitarian Mine Action in Syria.

It highlights the extent of explosive ordnance contamination in Syria, its devastating impact on people, vital infrastructure and provision of humanitarian assistance, as well as the crucial activities performed by humanitarian mine action actors and the action required to address this issue.

In 2020, there were an average of 76 recorded explosive ordnance accidents per day, equivalent to one every 20 minutes. Travelling or moving from one place to another, agricultural and household work, and playing with the explosive ordnance were the main activities at the time of accidents.

Syria is the country recording the largest number of explosive ordnance casualties in the world, the majority of recorded accidents are in northwest Syria. United Nations Mine Action Service (UNMAS) coordinated casualty reports and recorded 12,345 explosive ordnance casualties in Syria between 2013 and 2020, resulting in 4,389 deaths and 7,956 injuries.

The actual number of casualties is certainly much higher given limitations in data collection. For example, Action on Armed Violence recorded 77,535 explosive ordnance casualties in Syria between 2011 and 2020.

In 2022, extensive bombing and shelling continues in northwest and northeast Syria, in addition to widespread violence across the country through missile and drone strikes, use of vehicle-based improvised explosive devices, and small firearms and light weapons.

Contamination is incredibly diverse and massive as the whole range of explosive weapons has been used in Syria: Improvised explosive devices, landmines, including improvised mines, aerial bombs, mortars, etc. have been widely used during the 11-year conflict.

All of Syria is contaminated. This includes agricultural lands, disrupting traditional local economy and increasing the danger on agricultural workers who return to unsafe fields to make a living that is vital for them and their families. Further, urban areas are highly contaminated which both puts people in danger and prevents humanitarians implementing much needed activities such as the rehabilitation of homes, schools and, health centres.

Operations to identify the extent of the contamination and safely clear the land for effective use will take decades.

“Syria will require long and complex clearance operations before any reconstruction can even be considered. The contamination is so vast and diverse that clearance experts have been obliged to adapt themselves to this new situation and invent new way to work. We are pretty sure than in 2050, in the middle of the century, clearance operations will be still going to free the country from the threat of mines and other explosive remnants of war.”

The report “Explosive ordnance in Syria”

Summary of the report “Explosive ordnance in Syria”